As every year on the occasion of the feast of Corpus Christi (Body of the Lord, second Sunday after Pentecost, 9th after Easter, ed), Orvieto relives the solemnity of the ceremony, both religious and purely popular. A “menar dances” is theProcession of the Ladies , the Saturday afternoon before, around 16:30, which proposes an insight imagery of medieval life: the nobles of the territories subject, arrived in town to march in the parade, were followed by numerous ladies and courtiers.And in honor of the first organized the mayor of the representations in the square dances to medieval songs, performances by flag bearers to those of hawkers, the People’s Palace as a backdrop. 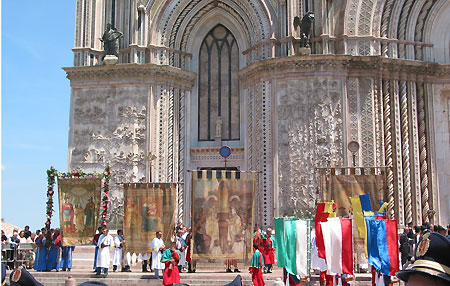 But it would be ungenerous to reduce the strong bond between Orvieto, the Orvieto and the Feast of Corpus Christi to, albeit spectacular, historical and religious pageants. This day is celebrated in fact themiracle of the Consecrated Host , the Eucharistic miracle of Bolsena . Tradition has it that in 1263 a Bohemian priest, Peter of Prague , through Bolsenastopped to celebrate Mass on the altar of S. Cristina.The priest was plagued by doubts. Can not believe the transformation of bread and wine into the blood and body of Christ. During the consecration was a miracle from the host gushed blood. The event was announced to the Pope , Urban IV , who resided in Orvieto , who ordered the immediate transfer of the vestments worn by the priest, the Holy Shroud of the Corporal , near the city of Rupe. Still visible to the faithful, contained in a reliquary , during the procession . Urban IV, a year later, in 1264 , extended the feast to the whole Catholic world .

At 10:30 Sunday morning , in front of the Cathedral of Orvieto , takes the ‘ encounter between the religious procession andhistorical parade , to give place to the Historical and Religious Procession of Corpus Christi . The historical parade of Orvieto comes from Sacred Representations of the fifties, and is undoubtedly one of the most beautiful in Italy . Composed of 400 participants, representing the history, culture and traditions of what was once a powerful Medieval City.
The show is really fascinating: the background of the unique setting of the Duomo and the monuments of the historic center, to the sound of drums and trumpets, you can admire the majestic gait of appearing, at ease in the role. Not forgetting the precious costumes, drapes and flags, armor and helmets, all created with a meticulous historical research and the great ability of seamstresses, embroiderers and workshops Orvieto.

A curiosity and event connected to the Feast of Corpus Christi . Also according to tradition, during the transport of the relics from Bolsena to Orvieto, the inhabitants of the countries where the procession passed thought to pay homage to Corpus throwing flower petals on the roads . This lay at the beginning of the last century has turned into Infiorate Corpus Domin the representations on the pavement with a religious theme and real masterpieces of floral art, such as the famousInfiorate Spello and the Flower Festival Sangeminese of San Gemini.